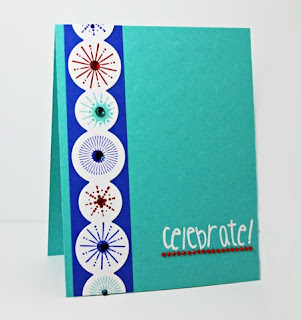 I really liked the layout of Laurie's card, so I decided that my second Muse Challenge attempt would be a more literal interpretation.  I used the same layout and embossed the background like Laurie did on her card.  I wanted to highlight the sentiment a bit more, so before I embossed the polka dots, I placed a little flag over the sentiment so that part would remain flat.  Then I placed a row of rhinestones underneath. 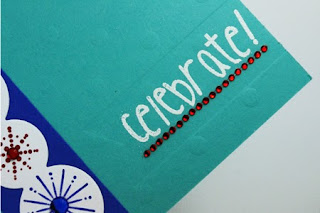 My color scheme came from this week's Color Throwdown...I LOVE the addition of Bermuda Bay to the patriotic colors, which were also perfect for this week's Simon Says...Patriotic challenge.  Since this week's cue card at CASology is fireworks, I decided to make those the focal point on PTI's Simple Circle's Die.  The fireworks were created with PTI's Daydreamer set and Stampin' Up's Snow Burst set.  And finally, I embossed the sentiment "celebrate" (made with Alphabet Soup by TAWS) because I actually intend to use this as a birthday card, so I'm also linking this up for Stacey's Birthday Linky Party, too.  Phew!  That was a mouthful.  I'm exhausted now, so I think I'll call it a day.  Goodnight! :)
To recap, I'm linking up to these challenges: 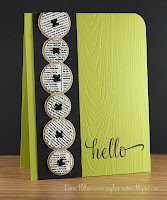 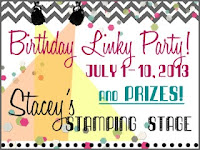 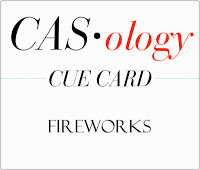