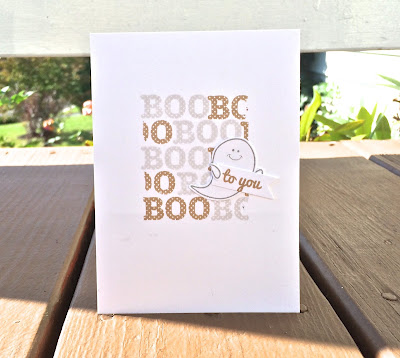 It's been a busy week, so last night I sat down to look at current challenges.  They started melding together in my head (as they often do) and this CAS card was the result.  The neutral colors (which are my very favorite autumn color combination at the moment) and theme were inspired by The Card Concept #41 Autumn Neutrals and the sketch was inspired by CAS(E) This Sketch #145.   The idea for the sentiment was sparked by CASology Week 168: You, so I wanted to make sure that the "you" was highlighted.  I decided that the little ghost holding a sign with "you" on it would do just that, so I trimmed his arm out and reattached it, so he he could do so. 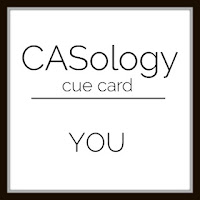 Next I wanted to play along with Papertrey's Create Along With Us: October Release Week Challenge.  Believe it or not, my card was inspired by this beauty made by the oh-so-talented Betsy Veldman.

And here is my simplified take: 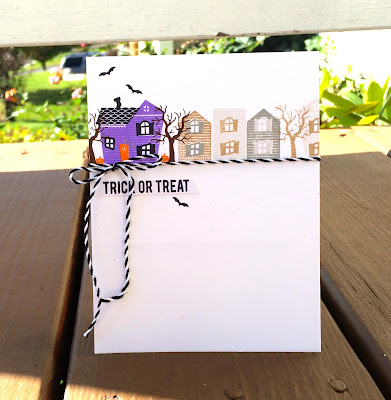 I wasn't quite ready to jump completely to Christmas projects, so I used the color scheme from the Simon Says Color Inspiration Challenge.  I wanted to highlight the house like Betsy did, but I off centered my focus and instead of trees in neutrals, I stamped other houses in neutrals.  The twine was supposed to mimic the plaid strip across the bottom of Betsy's card, and I swapped little bat silhouettes for the sleigh silhouette because I liked the bats flying in the Simon inspiration photo.
**Just to let you know, I'll be gone for a little while.  Had I not prepared this post ahead of time, I probably wouldn't have shared these cards.  My grandfather passed away today.  I believe firmly that families are forever, but our hearts are broken.
Posted by Lindsey at 9:28 PM 26 comments: 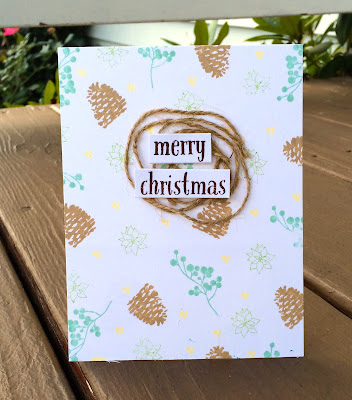 I'm back. :) It's a double post night because we have birthday celebrations going on this weekend and as scatterbrained as I am, I decided I better just post both cards tonight or I will likely forget about it.  And I love this card, so I don't want to forget about it. :) I loved the patterned paper I created so much for this card that I used the rest of it to make this more CAS version of a Christmas card.  It was inspired by the following challenges:

Oh, I almost forgot!  Winnie & Walter also has a Craftie Challenge....one where you are supposed to show your crafting in action.  It can be you, your craft room/supplies, etc.  I am definitely not a fan of posting pictures of myself, but I figure someday I may want to remember the time I crafted literally out of two packing boxes, so here we are...me and my two little boxes. :) 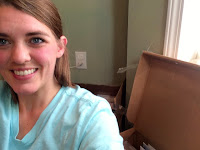 Alright, I just couldn't end this post with a picture of myself.  (You know what they say about people remembering the first and last thing, right?) SO, this little one was my card picture taking buddy, and I'd rather end the post with her.  This almost one-year-old (I can't believe it! Sniff!) was not interested in getting her picture taken (try as I might!), but I think she's pretty adorable even from the back. :) 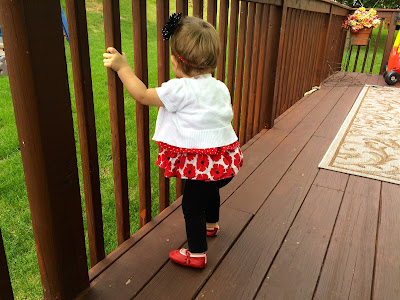 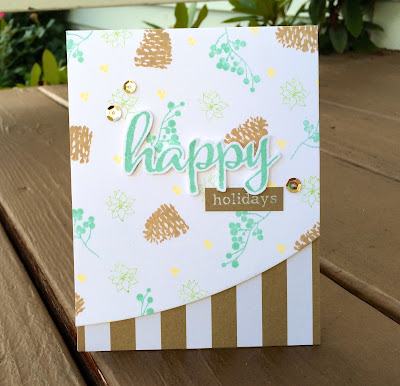 Hi!  I have another challenge-filled card to share today that was inspired by several Winnie & Walter Challenges.

Metallic/Gold Challenge
BBB: masterBoard Background Building Challenge
Color Challenge (aqua, mint, yellow, and kraft)
I had so much fun creating this background.  It's a combination of W&W's Winter Wonderland set and a couple Clearly Besotted sets.  It's subtle, but the striped paper is actually a shimmery metallic gold. And of course the sentiment is from W&W The Big, the Bold, and the Happy...I love how versatile this set is! I'll be back shortly to share a second card I made with the background I created.  See you soon! :)

Just for You, Deer 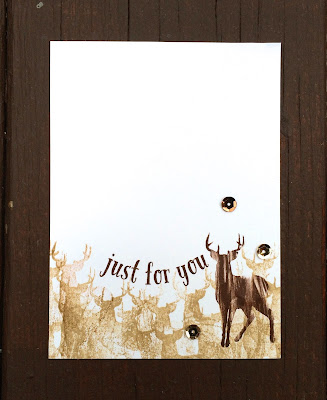 Hi!  I'm back and with a card I'm pretty excited to share.  It's an idea that popped into my head and I just went for it.  Normally I really think about things, but this one was basically a whim.  I was looking over the Winnie & Walter WCMD challenges and they all started combining in my head and this card was the result.  (I was inspired by the following W&W challenges: Metallic/Gold Challenge, Make it Masculine Challenge, and Partial Stamping Challenge as well as CTS#143.)

My favorite part of the card was a total accident.  After having lots of fun partially stamping the deer from W&W's Winter Wonderland set in kraft, I went to ink up my deer in brown and got tons of ink on the acrylic block.  I didn't want it to smudge my card, so I started to wipe off the block and accidentally swiped my deer image.  The swipe looked like woodgrain, and I could have leapt with excitement.  I'm pretty sure I did a little happy dance.  I definitely plan to make that "mistake" again soon. 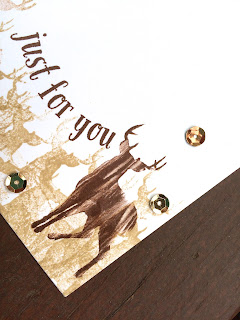 I wish I had been so clever on my own, but the sentiment was a happy accident as well.  It must have been the lingering influence of Michele from my last card that helped me create a pun.  I had planned to give this card to my brother-in-law, but now that I see that it reads "Just for you...deer", I've decided my husband will need to be the recipient of this one. :) I finished the card off with some sequins and was quite pleased that I managed to incorporate them into a masculine design.  Thanks so much for visiting today and reading this long post!  When I get excited about something it's hard for me to be concise. :)
Posted by Lindsey at 11:10 PM 13 comments: 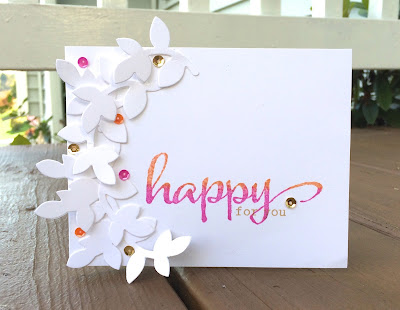 Hello, friends!  The idea for this card actually started when I saw this amazing card by my super talented friend Michele Ferguson.  Stunning, right?
I didn't move forward because my sequins are all boxed up.  Then with a stroke of good fortune I received a little pack of sequins as a thank you with a recent Neat & Tangled purchase.  Next, Winnie & Walter started hosting a slew of wonderful challenges, one of them being the gold/metalic challenge and the stars started to aline.  CAS(E) this Sketch #143 was posted (I tipped the sketch) and my final source of inspiration was the good news that dear friends of mine are finalizing the adoption of their daughter next week.  Lots of white for a sacred occasion mixed with bright colors for the joy and happiness that I'm sure they will be feeling. 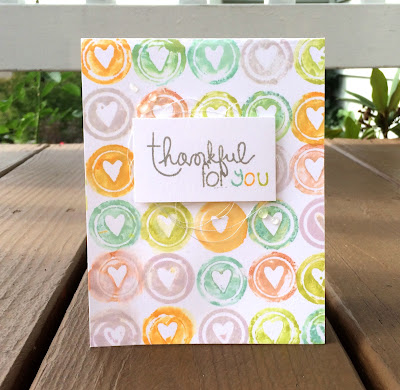 Hi!  I made this card a bit ago and forgot to share it.  When I received TAWS Iconic set a year (maybe 2?!) ago I had the idea for the pattern on this card, but somehow never the time.  I used just one of the images in the set to build a messy watercolor background.  Atypical for me, I embraced (on purpose!) the imperfections, blurring of colors, and uneven stamping.  And I kind of love it.  I tried to channel my inner Laura Bassen by adding some string and glossy accent dots to finish it off.  Well, the sun is visiting today and we are off to enjoy it!  Have a great week!

I'm linking this up to:
Simon Says Wednesday Challenge: Anything Goes
TAWS: October Link Up
Posted by Lindsey at 1:49 PM 11 comments: 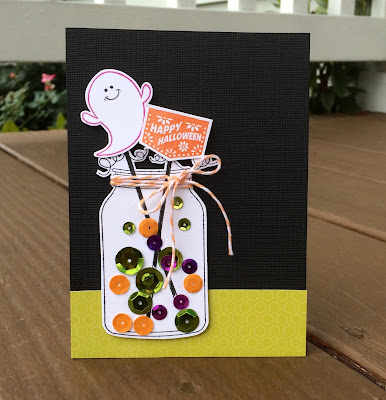 Hello!  Popping in to share one of the other cards I made from my 12 Kits of Occasions Too Cute to Spook kit.  (Click here to see my first post.) Wish I'd had a chance to photograph more because the rain is back and here to stay for a few more days.  I'm linking this up to Simon Says Wednesday Challenge: Anything Goes and Simon Says Stamp's World Cardmaking Day Link-up. Have a wonderful weekend!