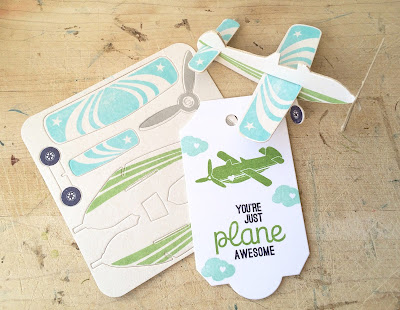 It dawned on me that I never shared my son's Valentine's that we made together.  I did the stamping, but his muscles can attest for the fact that he helped die cut all of these out...and there were a lot (+25).  He also wrote his little name on the back, which was no easy feat let me tell you.  He also had a lot of input on the colors.  Green is his favorite color, so all the boys had to be green.  But for the girls he wanted purple and pink and he was very particular about that...couldn't be pink and purple on the same tag.  There had to be two separate tags.  I stamped out samples and he okayed them. :) 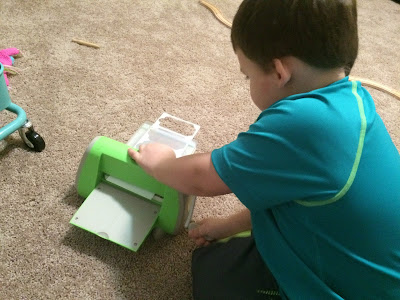 I used Paptertrey's Love You To Pieces: Airplane Stamp Set and Die Collection for everything.  I even used the Love You To Pieces: Additions, so we could add to/from on the back of the tag.  I loved that the die is sized to fit perfectly on the coasters, but I actually think that the plane might fold better if it had been made of heavy weight cardstock.  I noticed that if I folded the coaster plane quickly, the coaster sort of pealed a bit on some of the folds.  I don't think that would happen with cardstock, but at the same time you wouldn't get the same nice weight of the coaster.  I didn't have time to test it out, though, because I started so late making them. 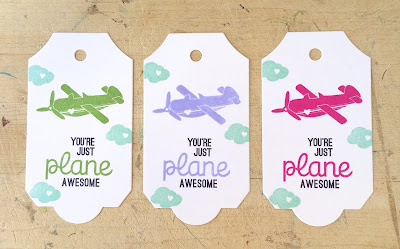 The MISTI was so helpful for this project.  Even with three different colored tags I was able to stamp all 28 of them in less than a half hour.  Yay!  I stamped the rest by hand, but I was able to do all the stamping and packaging in two hours total, which I thought was pretty good. 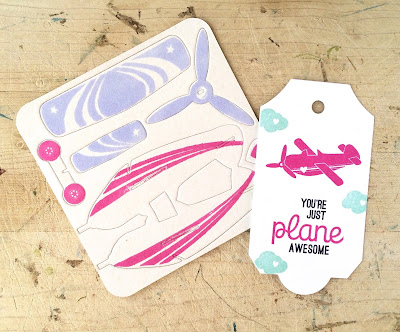 In the end we added a sucker.  I was ready to go with a non-sugar Valentine's, but my cute little boy was not and since these were his Valentine's, I caved. :) Or maybe I should say that we both got something we wanted.  I totally forgot to take a picture of all of them when they were done, but luckily was able to snag a quick shot of my son's Valentine right before he ripped it open to get out his airplane and sucker. 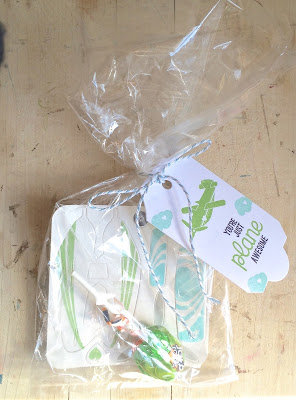 All in all I think it was a hit.  At least it was for my son and that is what matters most!
Posted by Lindsey at 2:58 AM

Email ThisBlogThis!Share to TwitterShare to FacebookShare to Pinterest
Labels: PTI